To share your memory on the wall of Steve Kieber, sign in using one of the following options:

Steve was born on October 11, 1957, in Ironwood MI., the son of August "Chum" and Margaret (Meyers) Rickard Kieber. They preceded him in death.

Steve graduated from J. E. Murphy High School in Hurley Wisconsin in 1975. He worked for the City of Ironwood as an Equipment Operator until 2002.

He raced WISSOTA Modified and street stock cars for many years. His main track was the ABC Raceway in Ashland WI. He also enjoyed tinkering around in his garage, camping, riding his side by side and plowing snow.

On October 27, 1990, he was married to Kim Magdziak in Ironwood, Michigan, and together they had two children.

Steve was a loving husband, father, and friend to everyone.

He is survived by his children, Mitch (Kara Roberts and her son, Parker) of Ironwood Michigan and Ashley (Fabian) Kristo and his grandson, Garrett Kristo of L'Anse, Michigan; sisters, LeeAnn Perelli of Portage, Wisconsin, Debbie Riggins of Richland, Washington, Bobbie (Peter) Pozzani of Hurley, Wisconsin; mother and father-in-law, Mike and Linda Magdziak of Ironwood, Michigan; sister and brothers-in-law, Wendy (Mickey) Backlund of Montreal, Wisconsin and Mike Magdziak of Kimball, Wisconsin; and several nieces and nephews.

A celebration of life will be held at a later date.

The family has chosen McKevitt-Patrick Funeral Home, Ironwood, to honor Steve’s legacy of life. You can leave a condolence or a tribute at mckevittpatrickfuneralhome.com.
Read Less

To plant a memorial tree in honor of Steve Kieber, please visit our Heartfelt Sympathies Store.

Receive notifications about information and event scheduling for Steve

There are no events scheduled. You can still show your support by sending flowers directly to the family, or planting a memorial tree in memory of Steve Kieber.
Plant a Tree

We encourage you to share your most beloved memories of Steve here, so that the family and other loved ones can always see it. You can upload cherished photographs, or share your favorite stories, and can even comment on those shared by others.

Posted Mar 29, 2020 at 10:33pm
Kim,
My deepest sympathies. Steve and I had a nice visit recently when he moved my snow. I am blessed to known him and always thought of him as a friend.
Becky Schwartz
Comment Share
Share via:
JC

Posted Mar 27, 2020 at 05:25pm
I will always remember the good times and there were many. I always loved you. Rest in peace brother.

Posted Mar 27, 2020 at 03:34pm
We’re so sorry for your loss! We always kidded each other because we had the same birthday! We also use to see who would laugh first! He will be missed! 😢 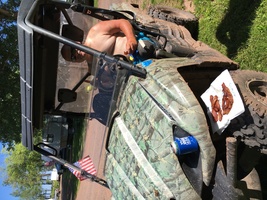