To share your memory on the wall of Larry Czerniak, sign in using one of the following options:

Print
Larry Czerniak, 66, passed away suddenly and peacefully on April 17, 2020, with his loving wife and soulmate by his side.

Larry was born on June 18, 1953, in Medford, Wisconsin to Alvin and Marjorie (Barta) Czerniak. He grew up in M... Read More
Larry Czerniak, 66, passed away suddenly and peacefully on April 17, 2020, with his loving wife and soulmate by his side.

Larry was born on June 18, 1953, in Medford, Wisconsin to Alvin and Marjorie (Barta) Czerniak. He grew up in Mercer and began playing drums in the family band at a very young age. In the 70’s and 80’s, Larry and his brothers, Jim and Bob, formed the Prizm Brothers Band and later the Z-Bros.

In 1983, he married his wife, Greta; and they raised their family in Hurley

Larry and his brother, Jim, owned and operated Prizm Entertainment in Ironwood, Michigan for the last 25 years until it was sold in 2019.

He enjoyed sharing his love of life with his family and friends. Recently after semi-retiring, he began to do what he loved, drumming and playing with many musicians including Corey Carlson, who he considered to be like a brother. He was truly known for his true talent as a drummer.

Larry and his wife, Greta, were one in the same. They shared many adventures together, enjoying travel, concerts, and spending time on Madeline Island with their many friends. He lived life to the fullest and was extremely dedicated to his wife, family, and Christ He was a devoted husband, father, and grandfather; and his grandson, Dallas, was the apple of his eye.

Larry is survived by his wife and soulmate, Greta; daughters, Vici Hoffman, Carmen Hoffman and Kristen (Ron) Schonavar; grandson, Dallas Colassaco of Hurley (who was more like a son to him); sisters, Mary (Erv) Bunn of Ironwood, Michigan, Cindy (John) George of Slater, Missouri, and Cathy Danley and Judy (Barry) both of Hot Springs, Arkansas; brothers, Jim Czerniak of Ironwood, Michigan and Bob (Sandy) Czerniak of Hurley, and Gene (Bev) Czerniak of Tampa, Florida.

Larry’s infectious smile, laugh, sense of humor and his kindness will be missed by everyone. His presence lit up a room.

" My dear Larry, when I found you, I became a believer that two people are made especially for each other. I loved you like I loved no other. Now all I can do is hold you close in my heart until we meet again”. Love, Greta

A Mass of Christian Burial will be held at St. Mary’s Catholic Church in Hurley at a later date.

Interment will take place at St. Mary’s Cemetery in Hurley.

The family has chosen McKevitt-Patrick Funeral Home, ironwood, to honor Larry’s legacy of life. You can leave a condolence or a tribute at mckevittpatrickfuneralhome.com.
Read Less

To plant a memorial tree in honor of Larry Czerniak, please visit our Heartfelt Sympathies Store.

Receive notifications about information and event scheduling for Larry

We encourage you to share your most beloved memories of Larry here, so that the family and other loved ones can always see it. You can upload cherished photographs, or share your favorite stories, and can even comment on those shared by others.

Posted Apr 29, 2020 at 01:30pm
Greta and Family: We are so saddened to hear that Larry has walked on. We loved seeing you together at the Kimball Inn having fun and mixing with friends. There are no words we can offer that can help, but we are keeping you in our prayers. Cathy and Harold
Comment Share
Share via:
JW

Posted Apr 28, 2020 at 05:21pm
Greta, We are thinking of you during this extremely difficult time. You and Larry are so very special to us. Your winter friends always.. 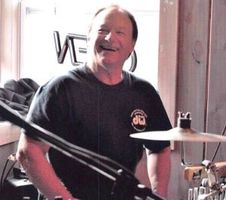