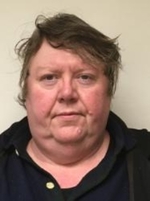 Kirk was born on August 4, 1958, in Kaukauna Wi to Lloyd Noss and Eleanor E Curtis

Kirk was preceded in death by his parents, his grandmother