Obituary for John A. Brottlund 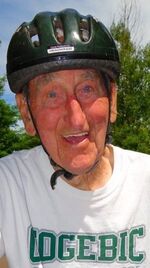 John was born on April 28, 1926, in Ironwood, son of John and Mabel (Westman) Brottlund. He attended Norrie, Newport, and Central grade schools and was a 1944 graduate of Luther L. Wright High School. A day after graduation, John attended the Great Lakes Naval Academy and served on the USS President Hayes as rank Baker 3rd class and was honorably discharged in 1946.

On July 2, 1949, he was united in marriage with Alice K. Harvat at Zion Lutheran Church in Ironwood by the late Rev. Jacob Hirvi.

John worked various local jobs; 4 years at the Geneva Mine, a year in Alaska, the Montreal Mine for 10 years, White Pine Mine for 4 years, Schultz Mobile Home until its closure and then Dan Newman Roofing when he retired at 53. Together with his wife Alice, he operated Brottlund's Rock and Antique Shop at their home on Lake Road for 20 years from 1963 to 1983. John had a love for minerals, known worldwide for his museum-quality crystal specimens, which are featured in many mineral museums. Even being mentioned in the book “The F. John Barlow Mineral Collection”

John was an avid woodsman, bicyclist, and skier. He was most comfortable in “his woods”. John received numerous awards in NASTAR ski racing, and he continued to participate in it into his 80’s. He qualified in his age group in the Midwest competition to attend the NASTAR finals in Utah and Colorado.

John was known for his quick wit and his humorous nature. His children, grandchildren, and great-grandchildren were his pride and joy.

John was preceded in death by his wife, Alice in 2009; daughter; Billie Johnson; brother; Willard; and his sister; Marian.

A memorial service will be held Saturday, November 27th at 11 a.m., at the McKevitt-Patrick Funeral Home, 305 N. Lowell St., in Ironwood. Visitation will be held prior from 10 a.m. to the time of the service.

The family has chosen McKevitt-Patrick Funeral Home of Ironwood to honor John’s legacy of life. You can leave a condolence or a tribute at www.mckevittpatrickfuneralhome.com