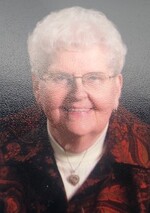 She was born in Winton, Minnesota on January 13, 1932, to Yalmer and Hilma (Rokola) Mattson;

She worked at National Envelope & a catering service in Waukegan. She was employed by Forslund Building Supply for 23 years, retiring in 1991.

During her life she was active in the Cub Scouts, PTA, and helped organize the Ironwood Township Fireman’s Auxiliary (Firebelles).

She was an active member of Trinity Lutheran Church, Ironwood, serving on the Stewardship Fellowship & Memorial Committees, was a member of the Lutheran Women’s Missionary League (LWML) and held office on the Local, Zone, and District Level. She attended District & National LWML Conventions serving as a delegate many times.

She was a volunteer with Regional Hospice, serving as Volunteer Coordinator for 8 Years.

She was preceded in death by her husband, Robert; her parents, Yalmer and Hilma; and brothers, Doug and Eldon.

A memorial service will be held at Trinity Lutheran Church in Ironwood Township, Michigan on July 21st at 11 am preceded by a visitation from 10-11 am.

Memorials can be made to Trinity Lutheran Church in Ironwood, Michigan.

The family has chosen McKevitt-Patrick Funeral Home of Ironwood to honor Delores’ legacy of life. You can leave a condolence or a tribute at mckevittpatrickfuneralhome.com.