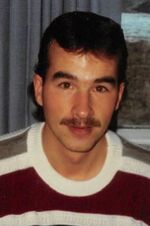 Brent C. Adams, 54, of Ironwood and previously of Superior, passed away on Tuesday, September 21, 2021 at his home.

Brent was preceded in death by his grandparents; George and Shirley Pellinen and Hellen Gowdy, his father; Kenneth, twin brother; Bryce, and sisters-in-law; Cheryl Adams and Lori Clossen.

A graveside service will take place at a later date for family and friends in Superior.

The family would like to thank Nicole Jackson for her loving care of Brent.